You are using an outdated browser. Please upgrade your browser to improve your experience and security.
Middle Passage
slave trade
Media
Print
Thank you for your feedback

Middle Passage, the forced voyage of enslaved Africans across the Atlantic Ocean to the New World. It was one leg of the triangular trade route that took goods (such as knives, guns, ammunition, cotton cloth, tools, and brass dishes) from Europe to Africa, Africans to work as slaves in the Americas and West Indies, and items, mostly raw materials, produced on the plantations (sugar, rice, tobacco, indigo, rum, and cotton) back to Europe. From about 1518 to the mid-19th century, millions of African men, women, and children made the 21-to-90-day voyage aboard grossly overcrowded sailing ships manned by crews mostly from Great Britain, the Netherlands, Portugal, and France. 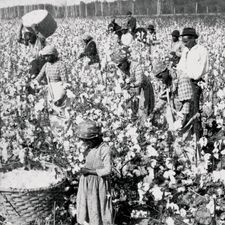 Read More on This Topic
slavery: The international slave trade
…the trip, known as “the Middle Passage,” usually to Brazil or an island in the Caribbean, was a matter of a few weeks...

Slaver captains anchored chiefly off the Guinea Coast (also called the Slave Coast) for a month to a year to trade for their cargoes of 150 to 600 persons, most of whom had been kidnapped and forced to march to the coast under wretched conditions. While at anchor and after the departure from Africa, those aboard ship were exposed to almost continuous dangers, including raids at port by hostile tribes, epidemics, attack by pirates or enemy ships, and bad weather. Although these events affected the ships’ crews as well as the enslaved, they were more devastating to the latter group, who had also to cope with physical, sexual, and psychological abuse at the hands of their captors. Despite—or perhaps in part because of—the conditions aboard ship, some Africans who survived the initial horrors of captivity revolted; male slaves were kept constantly shackled to each other or to the deck to prevent mutiny, of which 55 detailed accounts were recorded between 1699 and 1845.

So that the largest possible cargo might be carried, the captives were wedged belowdecks, chained to low-lying platforms stacked in tiers, with an average individual space allotment that was 6 feet long, 16 inches wide, and perhaps 3 feet high (183 by 41 by 91 cm). Unable to stand erect or turn over, many slaves died in this position. If bad weather or equatorial calms prolonged the journey, the twice-daily ration of water plus either boiled rice, millet, cornmeal, or stewed yams was greatly reduced, resulting in near starvation and attendant illnesses.

In the daytime, weather permitting, slaves were brought on deck for exercise or for “dancing” (forced jumping up and down). At this time, some captains insisted that the sleeping quarters be scraped and swabbed by the crew. In bad weather the oppressive heat and noxious fumes in the unventilated and unsanitary holds caused fevers and dysentery, with a high mortality rate. Deaths during the Middle Passage, caused by epidemics, suicide, “fixed melancholy,” or mutiny, have been estimated at 13 percent. So many bodies of dead or dying Africans were jettisoned into the ocean that sharks regularly followed the slave ships on their westward journey.

The Middle Passage supplied the New World with its major workforce and brought enormous profits to international slave traders. At the same time, it exacted a terrible price in physical and emotional anguish on the part of the uprooted Africans; it was distinguished by the callousness to human suffering it developed among the traders.

The Editors of Encyclopaedia Britannica This article was most recently revised and updated by Adam Augustyn, Managing Editor, Reference Content.