You are using an outdated browser. Please upgrade your browser to improve your experience and security.
Gridiron football
sport
Media
Print
Please select which sections you would like to print:
Thank you for your feedback

After World War I had put the game temporarily on hold, college football fully came of age in the 1920s, when it became widely recognized as America’s greatest sporting spectacle (as opposed to baseball, which was the national pastime). The first football stadiums at Harvard, Yale, and Princeton were modeled on the ancient Greek stadium and the Roman Colosseum, their architecture revealing much about football’s cultural status. With a stadium-building boom in the 1920s, attendance more than doubled, exceeding 10 million by the end of the decade, and newspaper coverage of the sport expanded at a similar rate. The daily newspaper had played a crucial role in the 1880s and ’90s, introducing football to a popular audience with no connection to universities and their teams. Commercial radio appeared in 1920 and began regularly broadcasting football games a year later. By the end of the decade three networks were broadcasting a slate of games each Saturday, and local stations were covering all the home teams’ games. By 1929 five newsreel companies were devoting roughly one-fifth to one-fourth of their footage to football in the fall. General-interest magazines such as Collier’s and the Saturday Evening Post regularly published articles by or about famous coaches or players, along with short stories about the star who wins both the girl and the big game. Movie theaters each fall screened a handful of college football musicals and melodramas with kidnapped heroes who escaped just in the nick of time to score the winning touchdown. 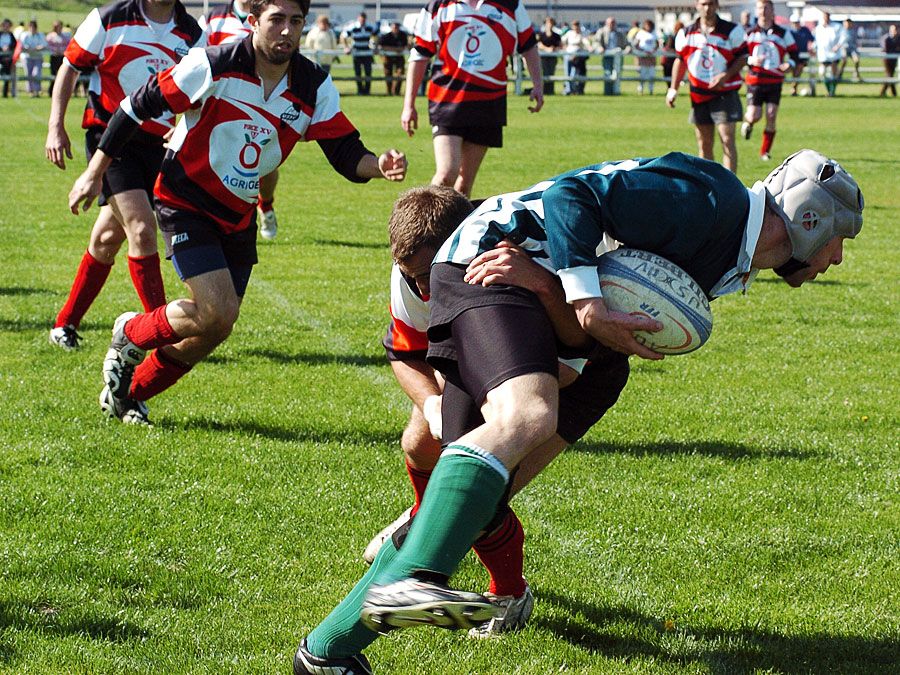 The 1920s saw the emergence of Red Grange as football’s first true celebrity. Grange received national acclaim for his brilliant performances in games against Michigan and Pennsylvania, but he also created the sport’s greatest controversy since the 1906 rule changes when he left the University of Illinois (without graduating) to join the Chicago Bears of the professional National Football League. “Professionalism” in any form—the paying of coaches, the recruiting and subsidizing of athletes, the commercializing of the supposedly amateur game—violated the sport’s purported principles, yet it was also at the heart of the popular spectacle staged in the enormous stadiums before as many as 120,000 spectators. College football was regularly attacked in intellectual journals, but the routine celebration of the game in the daily and weekly coverage of the popular media drowned out any criticism. A report by the Carnegie Foundation in 1929 documenting professionalism at 84 of 112 institutions troubled many college administrators but was generally shrugged off by the public and the sportswriters who fed its passion for the game.

In the 1920s and ’30s colleges and universities throughout the Midwest, South, and West, in alliance with local civic and business elites, launched campaigns to gain national recognition and economic growth through their football teams. They organized regional conferences—the Big Ten and the Big 6 (now the Big 12) in the Midwest; the Southern, Southeastern, and Southwest conferences in the South; and the Pacific Coast Conference in the West—and scheduled “intersectional” games with regional prestige at stake. The Rose Bowl in Pasadena, California, on New Year’s Day, first contested in 1902 between Stanford and Michigan, then annually beginning in 1916, determined an unofficial national champion and was also a highly profitable commercial enterprise. Promoters in other Sun Belt cities developed rival bowl games—the Orange Bowl in Miami (1933), the Sugar Bowl in New Orleans (1935), and the Cotton Bowl in Dallas (1937)—eventually to be joined by so many others that the NCAA in the 1950s began to regulate them.

Knute Rockne and the influence of coaches

A distinguishing mark of American football is the renown and status granted to the most successful and innovative coaches. The first innovators were men such as Walter Camp (not literally a coach but an adviser), Amos Alonzo Stagg at the University of Chicago, George Woodruff at Pennsylvania, and Lorin Deland at Harvard, the coaches who developed the V trick, ends back, tackles back, guards back, flying wedge, and other mass formations that revolutionized, and nearly destroyed, the game in the 1890s. The most influential of the early coaches was Pop Warner, whose wingback formations (the single wing and the double wing), developed at Carlisle, Pittsburgh, and Stanford, became the dominant offensive systems through the 1930s.

The only rival to Pop Warner’s wing formations in the 1920s and ’30s was Knute Rockne’s Notre Dame box, his refinement of the shift from the T to a box-shaped formation that was first developed by Stagg. A series of rule changes eventually rendered the box shift ineffective, but Rockne, football’s first celebrity coach, was less an innovator than a master teacher and motivator. Under his guidance, Notre Dame developed the dominant football program in the country. Theirs was the only team of the era with a nationwide following and the benchmark against which others were measured, yet Rockne accomplished this under most unpromising circumstances. The 1920s were marked by anti-Catholic and anti-immigrant prejudice in much of the country, and Notre Dame’s teams were decidedly Roman Catholic and ethnic. College football was transformed in the 1920s and ’30s by the sons of Italian, Polish, Jewish, and other southern and eastern European immigrants, most conspicuously in the lineups of Catholic universities (Fordham, St. Mary’s, and more than a dozen others in addition to Notre Dame) and the state universities in Pennsylvania and the upper Midwest. Known as the Ramblers or the Nomads (the “Fighting Irish” nickname was adopted in the late 1920s), the Notre Dame team developed a national schedule out of necessity rather than design. Refused games by nearby Big Ten rivals, Rockne scheduled contests with Army, Georgia Tech, Southern California, Southern Methodist, Nebraska—an entire intersectional schedule rather than a key game or two. The university’s administrators soon recognized the advantages to be had, as Notre Dame became the representative school for Catholics and new immigrants throughout the country. In an era of university-building through big-time football, Notre Dame became the model that many others sought to emulate.

Initially the paying of coaches was controversial, as yet another mark of professionalism in the amateur sport, and there was always resistance to coaches’ increasing control over the game. Rules to prevent “sideline coaching”—sending in plays from the sidelines—were first established in 1892 and not abandoned altogether until 1967. After free substitution was permitted during World War II because of the wartime manpower shortage, a postwar controversy over one-platoon or two-platoon football (11 men playing both ways, or separate squads for offense and defense) arose in part out of concern that coaches not gain more control over the game. The colleges returned to one-platoon football in 1953, but in 1965 open substitution and two platoons returned to stay, and coaches soon took over all of the play calling. Successful coaches were well compensated, often earning more than full professors by the 1920s (a time when such disparities were controversial) and eventually more than college presidents; this trend culminated in the multimillion-dollar salaries of the 21st century.

As college football thrived, professional football struggled for respectability. The group of teams that became the National Football League (NFL) was organized in 1920 as the American Professional Football Association (changing its name in 1922), with Jim Thorpe as its nominal president. Former (and sometimes current) college stars had played for money since 1892, initially for athletic clubs in western Pennsylvania, then for the openly professional teams that were formed in mostly small towns in Pennsylvania, Ohio, and Illinois. In its first season, in 1920, the APFA had 14 teams, including George Halas’s Decatur (Illinois) Staleys, who in 1922 became the Chicago Bears, the NFL’s dominant team for much of its formative period. Joe Carr, an experienced promoter, succeeded Thorpe as president in 1921 and remained in that position until his death in 1939. Over the 1920s and early 1930s, league membership fluctuated between 8 and 22 teams, the majority not in large cities but in towns such as Akron, Canton, Dayton, and Massillon, all in Ohio; Racine, Wisconsin; and Rockford, Illinois. With professionalism widely regarded as the greatest danger to college football, professional football was little more respectable than professional wrestling. Red Granges’s turning professional in 1925 provided a temporary boost to the professional game, but interest in professional football could be sustained only in those communities with franchises.

The NFL took its modern shape in 1933 under Carr’s guidance, when it was reorganized in two five-team divisions of big-city clubs (with Green Bay the lone exception) whose leaders would meet at the end of the season for the NFL title. In the 1930s professional football was predominantly a working-class spectator sport. The preseason College All-Star Game, created by Chicago Tribune sports columnist Arch Ward in 1934 to pit the reigning NFL champion against a team of just-graduated collegians, helped break down the barrier between college and professional football. Over the 1930s and ’40s the professional sport’s popularity grew in NFL cities, particularly those such as New York without a major state university with which to compete for the community’s loyalty. Minor professional leagues such as the American Association, Dixie League, and Pacific Coast Professional Football League had relatively modest local followings. The NFL was also successful enough to attract competitors. The American Football League was formed in 1926 by Grange and his agent, but it lasted just one year. A second (1936–37) and third (1940–41) AFL were also formed. Finally, the All-America Football Conference (1946–1949) seriously challenged the existing league and contributed the Cleveland Browns, San Francisco 49ers, and a first version of the Baltimore Colts to an expanded NFL in 1950. Yet professional football could offer the public nothing comparable to the compelling rivalries, youthful enthusiasm, and colourful pageantry of college football. It was only in the 1950s with the arrival of television that professional football could reach beyond the franchise cities to become a national sport.