You are using an outdated browser. Please upgrade your browser to improve your experience and security.
Agatha Christie
British author
Media
Print
Thank you for your feedback

British author
WRITTEN BY
The Editors of Encyclopaedia Britannica
Encyclopaedia Britannica's editors oversee subject areas in which they have extensive knowledge, whether from years of experience gained by working on that content or via study for an advanced degree....
Alternative Titles: Agatha Miller, Dame Agatha Mary Clarissa Christie, Mary Westmacott

What is Agatha Christie known for?

Agatha Christie was an English detective novelist and playwright. She wrote some 75 novels, including 66 detective novels and 14 short story collections. Christie is perhaps the world’s most famous mystery writer and is one of the best-selling novelists of all time. Her works are reportedly outsold only by Shakespeare and the Bible.

Agatha Christie began writing detective fiction while working as a nurse during World War I (1914–18). She began her debut novel, The Mysterious Affair at Styles, in 1916 and published it after the end of the war, in 1920. The novel introduced Hercule Poirot, one of Christie’s most enduring characters.

What are Agatha Christie’s most famous works?

Agatha Christie’s most famous novels include And Then There Were None (1939), Murder on the Orient Express (1933), and The ABC Murders (1936). Her novels have sold more than 100 million copies and have been translated into some 100 languages. Many of Christie’s works have been adapted for television and film.

After her husband, Col. Archibald Christie, asked for a divorce, Agatha Christie mysteriously disappeared for nearly two weeks. On December 4, 1926, her car was found abandoned on a roadside. It was reported that she committed suicide. Detectives turned to her manuscripts for clues. Eventually, Christie was found alive at a spa in Yorkshire, England.

Educated at home by her mother, Christie began writing detective fiction while working as a nurse during World War I. Her first novel, The Mysterious Affair at Styles (1920), introduced Hercule Poirot, her eccentric and egotistic Belgian detective; Poirot reappeared in about 25 novels and many short stories before returning to Styles, where, in Curtain (1975), he died. The elderly spinster Miss Jane Marple, her other principal detective figure, first appeared in Murder at the Vicarage (1930). Christie’s first major recognition came with The Murder of Roger Ackroyd (1926), which was followed by some 75 novels that usually made best-seller lists and were serialized in popular magazines in England and the United States.

Christie’s plays include The Mousetrap (1952), which set a world record for the longest continuous run at one theatre (8,862 performances—more than 21 years—at the Ambassadors Theatre, London) and then moved to another theatre, and Witness for the Prosecution (1953), which, like many of her works, was adapted into a successful film (1957). Other notable film adaptations include Murder on the Orient Express (1933; film 1974 and 2017) and Death on the Nile (1937; film 1978). Her works were also adapted for television.

In 1926 Christie’s mother died, and her husband, Colonel Archibald Christie, requested a divorce. In a move she never fully explained, Christie disappeared and, after several highly publicized days, was discovered registered in a hotel under the name of the woman her husband wished to marry. In 1930 Christie married the archaeologist Sir Max Mallowan; thereafter she spent several months each year on expeditions in Iraq and Syria with him. She also wrote romantic nondetective novels, such as Absent in the Spring (1944), under the pseudonym Mary Westmacott. Her Autobiography (1977) appeared posthumously. She was created a Dame of the British Empire in 1971.

Get exclusive access to content from our 1768 First Edition with your subscription. Subscribe today
This article was most recently revised and updated by Alicja Zelazko, Assistant Editor. 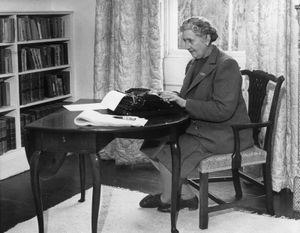